How to optimise for efficiency

Reducing supply chain costs almost always starts with wanting to renegotiate contracts with third party logistics suppliers. The next stage is requests for tenders in order to compare prices between suppliers.
This strategy may deliver benefits in the short term, but there are limits to what savings can be achieved by putting pressure on suppliers in the medium to long term.
The sweetness of an initial cost reduction can quickly be soured once cost increases outside the supplier’s - or your - control start to leave a bitter aftertaste. Such increases can include fuel costs, come from market capacity imbalances or simply be a result of increased complexity of your logistics.
Few would disagree that optimisation is the way forward – but what is the optimum way to optimise?

OEMs – original equipment manufacturers: the companies which have their name on the finished vehicles have become very skilled at optimising inbound logistics. In most cases the OEM arranges shipment from the component factory (called a Tier 1 supplier) to the vehicle assembly plant.
This has led to Tier 1 suppliers siting their factories close to the assembly plants, so components can be delivered almost directly to the assembly line for just-in-time manufacturing. Many such components are relatively large and difficult to store, so it is much easier to manufacture them according to demand, rather than have them take up warehouse space with consequent additional in/out logistics movements.
When it comes to suppliers to the Tier 1 factory (known as Tier 2 suppliers), it is far more likely that those suppliers are sited elsewhere – even in a different country. The transport costs and logistics for the Tier 2 --> Tier 1 part of the supply chain are therefore more complex.

In 2014, Transport Intelligence published a report about Automotive Logistics based on work by the International Car Distribution Programme (ICDP). The report identified three categories of logistics costs and set out the spends of all European automotive manufacturers: 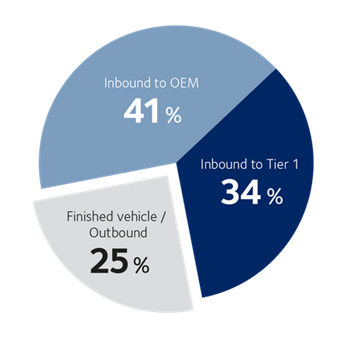 The figures show that the cost of Inbound to OEM and Inbound to Tier 1/2 logistics combined make up 75% of the total logistics cost.
It is therefore prudent to look at the savings which can be made in these categories combined. 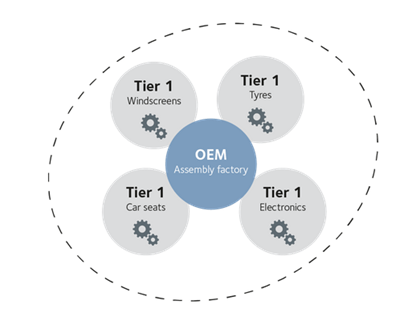 Extending the optimisation to Tier 2

To illustrate this, let us consider one of the many types of item supplied to an OEM by a Tier 1 supplier – car seats.
The car seat supplier is contracted to supply seats to the OEM’s assembly factory.
Like other suppliers, its factory is located very close to the OEM’s assembly plant, in fact so close that they are often within the same compound and so transport between the production lines can probably be achieved with fork lift trucks. 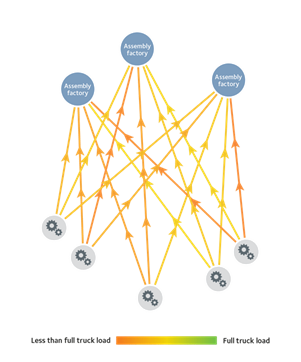 It is impossible for all the factories in a supply chain to be close to each other – especially when considering raw materials which may come from agriculture or even from below the sea bed in the case of oil which is used to make plastics. For example, aluminium is produced by energy-intensive smelting which has to take place close to reliable, cheap supplies of power.
One of the materials used to make car seats is leather.
Each leather supplier actually supplies more than one car seat factory and almost certainly more than one OEM – the diagram below shows these flows in simplified form, and the fact that not every shipment is a full truck load. Each supplier therefore has several trucks a week collecting part loads (LTL – “less than full truck loads”) and driving them to each factory they supply. 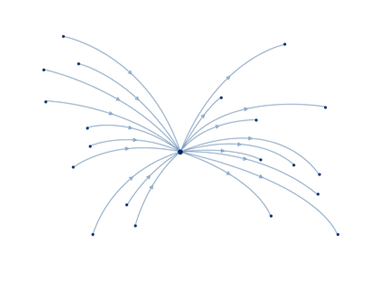 Analogous to the hub-and-spoke airline model:

If you want to fly from one major airport to another, chances are you can find a choice of direct, nonstop flights.
But when there is insufficient demand for seats between small cities, it is likely that you will need to connect via a hub airport.
As it is not possible to fill a whole aircraft on a direct route several times a day, an airline can run a more efficient operation by flying larger aircraft from the small cities to a major hub airport. At the hub, passengers transfer to other aircraft which take them to their final destination.
It is exactly this hub and spoke model which can be applied in order to optimise a supply chain. 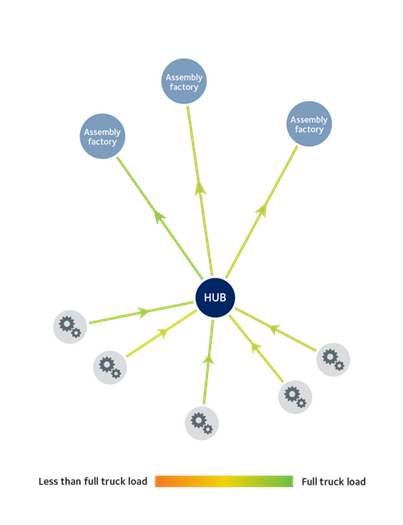 By siting a distribution centre in a suitable location, the supply chain can become much more efficient by reducing the less than full truck loads and the direct, non-stop shipments. This consolidation and realignment of the flows reduces the number of trucks needed. Furthermore, the distribution centre may be a cross dock if input and output can be coordinated particularly well, and thus avoid the need for storage.
The result is significant savings. It is also much easier to coordinate just-in-time deliveries. Of course, the geographical location of the distribution centre is important so as not to have unnecessarily long transit times. Having a distribution centre in the chain does lengthen the overall transit times but this is not a problem once the chain is running and the transit times are calculated into the just-in-time planning. The supply chain is simpler and more efficient as a result.

This method of optimisation with a distribution centre need not be standalone. It can of course be combined with other methods such as what is known as the milk run.
The milk run optimises local collection and is named after the milk tankers which visit several dairy farms to collect milk, only returning to the depot when the tanker is full or there is no more milk in the area left to collect.
This sort of optimisation gives many benefits: by shipping more full truck loads and fewer part loads, the number of truck movements is lower, giving more efficient use of dock capacity, trucks and drivers, fuel, tolls and many other aspects – not least reduced CO2 emissions.

By examining not just those parts of the automotive supply chain adjacent to the final assembly stage (Tier 1), there are extensive transport and logistics savings to be made. Transport costs for inbound to Tier 1 and Tier 2 account for costs three times higher than for outbound transport from final assembly to the end customers.
Much of the cost of components in lower supply chain tiers includes hidden costs which are a consequence of supply chains not being optimised.
A careful analysis of more than just the top tier of the supply chain can lead to extensive savings by reducing the wastage which stems from shipping too many part loads instead of full loads. 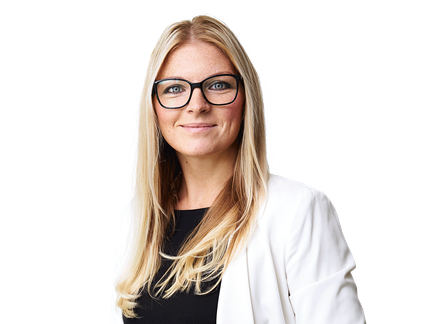