Port operations affected by COVID-19 lockdown in the Beilun District 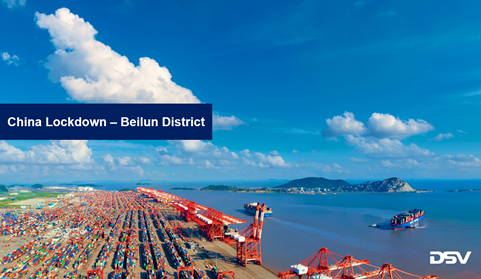 From October 14th, Ningbo city's Beilun district in China - the location of several large container terminals - has been placed under lockdown by the Ningbo Government until further notice due to the sudden rise in positive COVID-19 cases in the region.

Beilun district is home to Beilun & Meishan Ports, which have an annual container throughput of millions of TEUs. According to Splash247, “the Beilun District houses the most amount of terminals at the Port of Ningbo-Zhoushan, the world’s largest port in overall tonnage terms and third largest when it comes to containers.”

With the decisive government efforts to rein in the epidemic with measures such as the closed-loop management, the impact is expected to be limited. The control measures are now in place at port yards in Beilun, but not all port yards have suspended services, hence there is still some flexibility to deliver goods. Despite that, operations at the Ningbo Port still have the potential to be affected by ongoing berthing delays and port congestion if unregulated.

Traffic control is in place which has affected terminal, depot, and container freight station (CFS) operations, but overall, not much impact on vessel berthing. As alternatives, DSV will make use of Yinzhou CFS and Zhoushan CFS to handle LCL cargo in Ningbo.

Fortunately, there is no major impact on the DSV Ningbo office.

Shanghai port remains operational, please coordinate with your operations team at Shanghai and Ningbo accordingly. We will continue to monitor the situation and keep you informed as updates continue to roll out. If you have any further questions or concerns, please reach out to your local DSV representative.