Risk of Rail Strike Still Looms in the U.S. 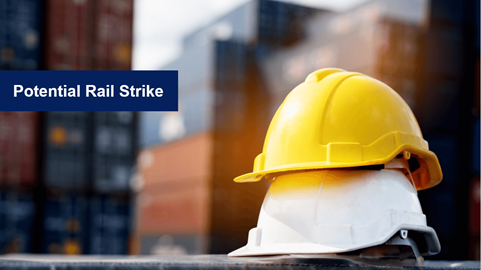 The risk of a year-end rail strike is still possible after two of the largest U.S. railroad unions split vote on a tentative contract deal. On Monday, Nov. 20, the Brotherhood of Locomotive Engineers and Trainmen (BLET) ratified the tentative agreement, while International Association of Sheet Metal Workers Air, Rail, and Transportation (SMART-TD) voted against it. The split results in four unions rejecting the deal and eight approving it.

The unions that have not agreed to the tentative deal are currently in a “cooling-off period,” which prevents any kind of work stoppage, strike, or lockdown. A deal must be ratified prior to Dec. 9 in order to prevent potential strikes. According to Logistics Management, "Dec. 5 mark[s] the end of the period for Brotherhood of Railroad Signalmen" but it is unknown if they will extend their cooling-off period to negotiate in unison with the other unions.

This all follows the tentative agreement that was made back in September by several U.S. railroad companies and union workers amid a potential strike then.

For context, railroads haul about 40% of the nation’s freight each year according to AP News. A shutdown could jeopardize many crucial shipments in agriculture, manufacturing, retail, and warehousing industries.

DSV will continue to monitor the situation and keep you updated throughout the next coming days. For any further questions regarding the matter, please reach out to your local DSV representative.