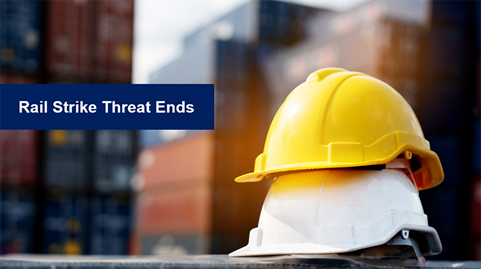 A bill was signed on Friday by the U.S. President to avoid a potential nationwide strike by railroad workers. The recent bill binds rail companies and rail unions to an agreement brokered by the administration earlier this September.
The agreement provides railroad workers a 24% wage increase over five years, with an immediate 14.1% increase, according to NBC News.

The decision to pass the bill came after four of the 12 rail unions rejected the initial agreement. A deal had to be ratified by the “cooling-off” deadline of Dec. 9 to prevent potential strikes.
With the deadline approaching and the threat of a strike looming, Congress intervened to prevent a potential railroad strike and, thus, passed the recent bill.
According to CNBC, “Railroad carriers begin prepping for a strike seven days in advance, according to federal safety measures. The carriers start to prioritize the securing and movement of sensitive materials such as chlorine for drinking water and hazardous materials.” Goods could have been halted as early as this weekend in preparation for a potential strike.

To review, railroads are responsible for hauling about 40% of the nation’s long-distance freight every year. A shutdown could have jeopardized many crucial shipments in agriculture, manufacturing, retail, and warehousing industries. This bill avoids massive disruptions to the flow of key goods and commodities around the country.

For any further questions regarding the matter, please reach out to your local DSV representative.