​Panalpina and Atlas Air are strengthening their long-standing partnership in the air freight industry. 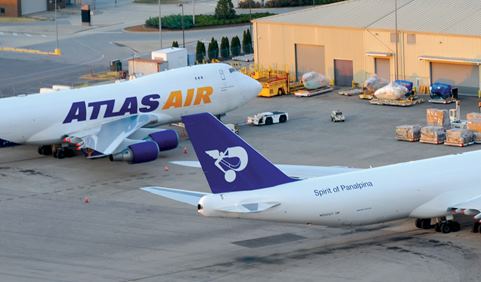 Panalpina and Atlas Air are strengthening their long-standing partnership in the air freight industry. As a cornerstone of a new five-year agreement, Panalpina will switch one of its wet-leased aircraft to more than 200 scheduled charters per year, thereby expanding its unique air freight network.

“The new long-term agreement with Atlas Air will intensify our cooperation and increase our joint business,” says Lucas Kuehner, global head of Air Freight at Panalpina. “The switch from one of our wet-leased 747-8Fs to more than 200 scheduled full charters per year as part of this agreement equals a change in our procurement strategy and prepares the ground for the continued expansion of our controlled air freight network.”

As of March, Panalpina will operate flights from Hong Kong to Huntsville with dedicated scheduled charters using Atlas Air 747-400 freighters. “We will not only maintain our scheduled capacity for our customers on the transpacific route but are planning to extend this service together with Atlas Air,” explains Matthias Frey, global head of Panalpina’s controlled air freight network.

William J. Flynn, president and CEO of Atlas Air Worldwide, says: “The new agreement, which now includes scheduled charters, enhances our service offering for Panalpina, and we look forward to expanding our relationship with Panalpina as the company’s network grows further.”

As part of the five-year agreement, Panalpina is extending its operation of the wet-leased 747-8F on the transatlantic route, which includes calls in Mexico and the UK.