I still call Shanghai home: The story of an expat

Rikke Thomsen has been back in Denmark for six months – after six years in Shanghai. Working for DSV was supposed to be a temporary thing. 12 years later; she says she practically has DSV tattooed on her arm. 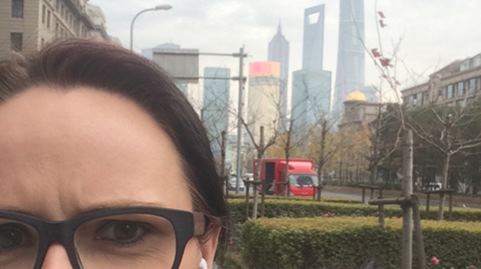 When Rikke finished college, the plan was to form a career working with juvenile delinquents. But she needed to gain some experience and some years before applying for an internship with the Danish Police. So she travelled, backpacking in Asia and working as a ski instructor in Austria, before returning home to Denmark to work temporarily at a children’s day care centre. Here, she met a colleague whose husband worked for DSV, and he offered to introduce Rikke to the world of freight forwarding.

I liked the atmosphere and thought freight forwarding would be a great way to spend two years before applying to the Police Academy. So I applied – and got rejected. But after six months, DSV contacted me again, this time offering me a job.

Rikke had barely finished her training period before she started to look for new challenges and became interested in sales – and in finding an adventure. She landed a junior sales position in DSV, which involved some travel activity, but still it wasn’t enough:

“I remember being in the office on a Tuesday afternoon looking at a world map and thinking where can I go. Somewhere far away and somewhere different. So I called Claus Thomsen [Regional Director DSV APAC] in China, not even thinking about the time difference…”

Claus Thomsen asked Rikke to call him back, and three weeks later she had a new job in Shanghai.

Moving to and settling into the Shanghai way of life was surprisingly easy: “I was so ready for a new experience, so the fact that things were different was just great. And the people I met were so nice and so helpful. Actually, it’s true what they say, moving somewhere new is so much easier than moving back to one’s home country, and I must admit that after six months back in Denmark, I am still going through a process of reintegration,” Rikke explains but quickly adds:

"I cannot for the life of me understand why more young people aren’t dying to travel with their job. In a company like DSV, the opportunity is there, why not grab it?"

Travelling and being part of a different culture has matured Rikke in a way that would not have been possible if she had stayed in Denmark. “I am a different person, I’m more tolerant and open, and I feel confident enough to not care what other people think. I know I can handle myself in all types of situations and environments. That’s a great gift,” she says.

An up and up experience

“I have been extremely privileged throughout the years. It’s been ‘yes’ all the way, and I haven’t experienced the financial crisis, because I left Denmark when things were still ok, and then I came to China where the growth rate was plus 10%, and things were really taking off.”

For Rikke, meeting the right people at the right time has been essential to her success. She has found tremendous support among superiors and colleagues who have helped her achieve ambitious goals as both Trade Lane Manager and Regional Sales Manager. Actually, she almost returned to home grounds in 2011: A new job in Stockholm, Sweden, had been lined up, and her replacement in Shanghai had been found. But four days before the Christmas break (and her return to Scandinavia), she got really cold feet.

“I just didn’t feel right, even though I had pitched the whole idea myself. So I went into Claus Thomsen’s office and just told it like it was. Luckily, we were able to work things out, and I got to stay in Shanghai for another four years.” This time as Regional Sales Manager responsible for an area the size of half of Europe and 30 sales representatives. “I am very grateful for that,” she says.

I am openly ambitious

Travelling has been great for Rikke’s career. In China, DSV is a very young and agile organisation allowing ideas to materialise quickly, and this suits Rikke who describes herself as openly ambitious.

“I don’t work for fun, I’m here to get things done and get ahead,” which isn’t always easy in a man’s world [the transport and logistics business], she admits, but adds: “I’m up for the challenge.” The dream of working with juvenile delinquents is long gone and has been replaced by a career in DSV, which has become a way of life for Rikke:

"If I’m not working for DSV, I would have to do something completely different, she comments."

Returning to the global DSV headquarters in Denmark, however, has been quite an eye opener and very far from an experience of returning home. “I still think of Shanghai as home,” she says and smiles. Things are much more formal here, very polished and very slick – it’s different,” she comments. “I feel as though I really need to behave,” she laughs, and reminisces about the sometimes crazy celebrations they used to have in Shanghai. “We could do with a bit more crazy here,” she muses.

In fact, Rikke finds that her Danish colleagues could do with loosening up a bit. “We are sometimes very set in our ways and react defensively to new ideas instead of welcoming them. I am finding that I need to lobby my ideas a lot more here in Denmark. Even though I still work for the same company, it’s a new job and a different culture, and in some ways I have to start over and prove myself again. That can be tough and something you need to be prepared for when changing jobs across borders,” she says.

Freedom and no control

Rikke has returned “home” to a new commercial role working with projects for the Air & Sea organisation in Denmark. “My partner and I agreed that we needed some family time in Europe, and we agreed on Denmark. So, here we are.”

In a funny twist of events, she now refers to Executive VP, DSV Air & Sea Denmark, Soeren Pape, who was also her boss in Shanghai. “I am very loyal and like to surround myself with people I trust – and who allow me a lot of freedom and exercise very little control. So that works out very well, because he knows me and also shares my Shanghai experience,” she comments.

While she is still finding things a bit stiff and very organised at the global headquarters, she is thrilled to see developments such as a global HR function and a global relocations function.

“I was crazy and determined enough to just make things happen back in 2009, but having an organisation in place that supports global career opportunities is such a great thing. It makes me want to travel again – maybe to South America or perhaps Africa next time; who runs things out there”? Rikke asks and laughs.