With the Brazil Wings service, Panalpina offers scheduled main deck capacity to South America from the U.S. The many benefits of this and many other services will again be presented at Intermodal South America. Since Brazil Wings launched in 2015, customers have mostly used it for high-tech products, heavy machines and equipment for agriculture, chemicals as well as aerospace and consumer goods. 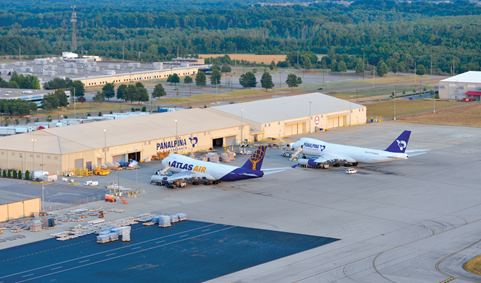 “Since the service launched a year ago, the most popular cargo has been high-tech products, heavy machines and equipment for agriculture, chemicals as well as aerospace and consumer goods,” says Gustavo Paschoa, responsible for sales and marketing at Panalpina Brazil.

To celebrate the one-year anniversary, Panalpina Brazil recently organized a customer event at Viracopos International Airport in Campinas, São Paulo. The customers participated in a workshop and took a tour through the cargo terminal and an exclusive look inside the Boeing 747-400 cargo aircraft.

With Brazil Wings, Panalpina offers customers many benefits, such as full capacity control, high frequency, cargo handling by its own team, customs clearance and delivery to final destination in Brazil. At Panalpina’s U.S. gateway in Huntsville, Alabama, Brazilian staff coordinate shipments destined for Brazil. “This makes communication with customers, authorities and subcontractors in Brazil much easier and adds an extra layer of quality and trust,” explains James Beck, in charge of Panalpina’s operations in Huntsville.

“The freighter flights from Huntsville to Viracopos also connect seamlessly with the scheduled freighter flights coming in from Hong Kong. We offer one of the fastest transit times from the Far East to South America,” adds Rene Genofre, Panalpina’s country head of air freight for Brazil.

In April, Panalpina will present the Brazil Wings service at this year’s Intermodal South America exhibition in São Paulo.