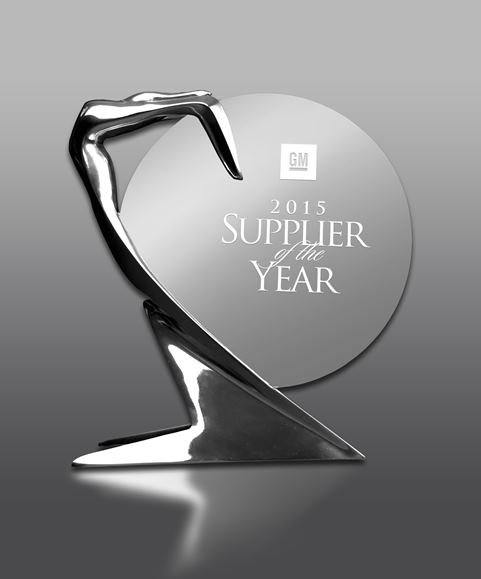 GM recognized 110 of its best suppliers from 17 countries who have consistently exceeded GM’s expectations, created outstanding value, or brought new innovations to the company. The announcement represented the most suppliers GM has recognized since debuting the Supplier of the Year event in 1992. This is the 3rd time DSV has received the award.

“We are focused on building positive supplier relationships, bringing new, customer-centric innovations to GM, and being the OEM of choice among suppliers,” said Steve Kiefer, GM vice president, Global Purchasing and Supply Chain. “The companies we recognize tonight not only have brought innovation, they delivered it with the quality our customers deserve.”

GM’s 2015 supplier recognition represents a nearly 40 percent increase in the number of suppliers honored compared to 79 recipients in 2014. More than half of the suppliers are repeat winners from 2014.

Winning suppliers were chosen by a global team of GM purchasing, engineering, quality, manufacturing, and logistics executives and selected based on performance criteria in Product Purchasing, Indirect Purchasing, Customer Care and Aftersales, and Logistics.

“We are very pleased to be GM supplier of the year for the third time. Our teams deliver great service to the GM supply chain every day of the year and we are always looking to improve even further. It is the dedication and customer focus being shown by our talented people all over the world that wins us these awards and that is a source of immense pride for us,” said Jens Bjørn Andersen, CEO of DSV.

General Motors Co. (NYSE:GM, TSX: GMM) and its partners produce vehicles in 30 countries, and the company has leadership positions in the world's largest and fastest-growing automotive markets. GM, its subsidiaries and joint venture entities sell vehicles under the Chevrolet, Cadillac, Baojun, Buick, GMC, Holden, Jiefang, Opel, Vauxhall and Wuling brands. More information on the company and its subsidiaries, including OnStar, a global leader in vehicle safety, security and information services, can be found at http://www.gm.com