A short window for extra-long pipes

One of Panalpina’s oil and gas customers is currently engaged in a 15-year drilling program in Oman. The customer enlisted a big steel manufacturer, to supply 62 kilometers of gas pipeline to support the project. Fast track development meant the customer required longer than usual pipes. To ensure timely shipment of this irregular-shaped cargo, Panalpina’s expertise was called upon. 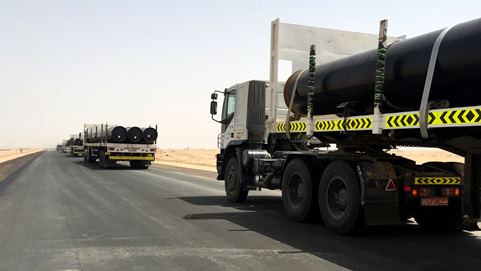 One of Panalpina’s oil and gas customers is currently engaged in a 15-year drilling program in one of the Middle East’s largest unconventional tight gas accumulations, the Khazzan-Makarem gas field. The customer recently enlisted Baosteel, one of China’s biggest steel manufacturers, to supply 62 kilometers of gas pipeline to support the project. Fast track development meant the customer required longer than usual pipes, so less welding would be needed on site. To ensure successful and timely shipment of this irregular-shaped cargo, Baosteel sought Panalpina’s expertise to provide a delivery plan.

62 kilometers of pipeline translated into 3,600 pipes that had to be shipped from China to Oman on three vessels. The port-to-port journey for each would take three weeks.

“When we first proposed the original delivery schedule to Baosteel, we could not have predicted that the official contract would be signed just two weeks before the first vessel needed to be positioned”, says Matthias Manthei, country head of Energy Solutions, United Arab Emirates.

“Pick-up and delivery of the pipes from Shanghai to the site in Oman also had to be done in an unusually short timeframe of just six months, while the irregular-sized cargo, a shortage of specific transport vehicles and strict customer requirements meant that this project presented more challenges than normal”, adds Matthias.

Panalpina was left with five weeks to organize the overland transport in Oman, inform the port about the right handling of the pipes and design special lifting equipment.

“Knowing the region, and in a smart move that put us ahead of the competition, we had proposed the new port of Duqm as the entry point to Oman”, explains Matthias.

“Despite the fact the crew at the port were new and had not handled this kind of cargo, there were distinct advantages to using Duqm”, adds Niklas Hauff, who was one of the project managers in Oman, together with Hayo Vrielink and Devadas Chadyath. ”As a newly developed port, it was less busy than others in Oman which meant waiting times of vessel to berth were minimized. More importantly, the port had enough storage capacity for the 1,200 pipes per vessel while they were waiting to be delivered to the site.”

Gas pipeline pipes are normally 12 meters in length but Baosteel’s cargo contained 18 meter long pipes, each measuring 90 centimeters in diameter and weighing 8 tons. In addition, the pipes had a very sensitive rubber coating.

Because Duqm had never handled this kind of pipes before, Panalpina had to play a bigger technical role in the port operations than usual. Panalpina shared knowledge on how to conduct the operation and store the pipes. Even special lifting equipment had to be designed for safe off-loading and loading. Specific beams that were brought in from India were required for the vessel discharge in Duqm, and also by the customer at site.

Setting up a milk-run

Once the cargo reached Duqm, customs ran smoothly despite it being during official public holidays. However, the team faced one more challenge. For this delivery, trailers able to transport 18 meter long pipes had to be acquired. Only 24 trailers that met the transport requirements and the customer’s exacting health, safety and environment standards were available in the entire country, so Panalpina planned a milk-run system with its local logistics partner, and again provided instructions on how to load the pipes correctly. This system included preventive maintenance of the trailers, as the trucks had to travel approximately 400 kilometers every day.

“Panalpina was in charge of the whole fleet for half a year. Convoys of 7 to 10 trucks left Duqm each day, each trailer carrying no more than three pipes. Since the customer does not allow driving after sunset, every truck travelled from the port to the inland site, over the course of two days,” explains Hayo Vrielink.

An average of 24 pipes arrived at the site per day meaning it took almost two months to deliver one vessel’s worth of pipes. Three weeks before the project deadline, all pipes were delivered to the site.

“This project gave our team in Dubai and the responsible marine charter desk in Bremen the chance to demonstrate their problem-solving skills, speed and efficiency when faced with new destinations and new challenges,” says Matthias.