It was a big night for Nicole and Panalpina. She has won Cardiff University’s ‘People’s Choice’ award for her work on Panalpina’s new inventory forecasting application ‘Demand-Driven Inventory Dispositioning’, in short ‘D2ID’. During a black-tie dinner at Cardiff University, the business innovation award was also officially handed over to Panalpina by Innovate UK. 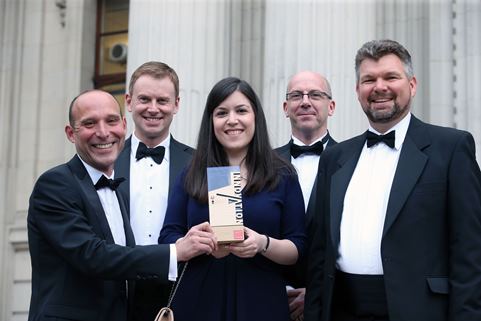 It was a big night for Nicole and Panalpina. Yesterday, she won Cardiff University’s ‘People’s Choice’ award for her work on Panalpina’s new inventory forecasting application ‘Demand-Driven Inventory Dispositioning’, in short ‘D2ID’. Dr Ian Brotherstone of Innovate UK did the honors of announcing Nicole Ayiomamitou as the winner at the black-tie dinner in Cardiff, Wales. (And yes, he did struggle just a little bit with her family name, but we cannot blame him.)

Cardiff University had invited the public to vote via social media for either her or any of the three other pioneering projects which according to the university have transformed practice in policy, healthcare, business, and society. Nicole’s project garnered most votes and positive comments on Facebook, Twitter and YouTube. One comment said: “Nicole is helping change the way of doing logistics. With her development, Panalpina can work together with customers to reduce their inventories, keep the business lean and even improve service levels. Inventory is one of the toughest wastes to manage in the supply chain. This tool keeps it simple and clearly shows where inventories are and where they should be. It will rock the inventory and supply world!” Three weeks ago, D2ID had already won Cardiff University’s business innovation award.

Nicole was the lead researcher on the D2ID project. The innovative venture wasforged through a Knowledge Transfer Partnership (KTP) by the UK government. The research project, co-sponsored by Panalpina, was supervised by Professor Aris Syntetos, chair in operational research and operations management at Cardiff Business School. The KTP Grading Panel recently judged the project ‘outstanding’ for its achievement in exceeding its original objectives.

“We are delighted that Nicole and D2ID won the ‘People’s Choice’ award on top of the other two accolades and thereby completed a hat-trick for Panalpina”, says Andrew Lahy, the company’s global head of logistics strategy and innovation. “It is a great testimony to how we can drive innovation in our industry and attract talent.”