What P comes to mind when you hear Kyoto?

Protocol, most likely, as in the Kyoto Protocol. Well, now there is another P linked to Kyoto: Panalpina. Panalpina has opened a new office in Kyoto, western Japan, making it one of very few non-Japanese freight forwarding and logistics companies with its own office in this city, which has a unique culture and style of working. 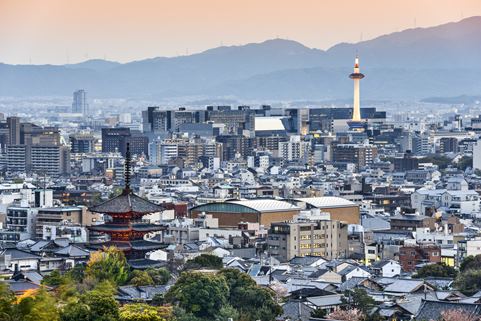 Protocol, most likely, as in the Kyoto Protocol. Well, now there is another P linked to Kyoto: Panalpina. Panalpina has opened a new office in Kyoto, western Japan.

Admittedly, the signatures that Panalpina put on the lease contract for the office in the heart of Kyoto are not as far-reaching as the signatures on the Kyoto Protocol, but they are certainly relevant for Panalpina’s existing and future customers in Japan’s Kansai region. Or as Simon Truss, the company’s Japan country manager and signee of the lease contract, puts it: “Panalpina is now one of very few non-Japanese freight forwarding and logistics companies with its own office in Kyoto. Our portfolio of existing customers in the Kyoto area already includes many of the top blue chip exporters from Japan, but we see a lot of potential here for doing business with small and medium-sized companies, too. Local relationships and close ties to the community and authorities are important success factors in Kyoto as the city has a unique culture and style of working.”

Panalpina has historically had a strong footing in Japan’s former capital, and boasts the largest block space agreement for air freight from Osaka’s Kansai International Airport (KIX) to Frankfurt in Germany. Many of Japan’s leading technology companies with headquarters in the Kyoto prefecture make use of this air freight capacity and Panalpina’s end-to-end service which includes customs clearance. “We work closely with our existing offices in Osaka and directly at the airport, where we have our in-house customs clearance team,” says Simon. “We also have a close-knit network of subcontractors around the sea ports of Osaka and Kobe. For both air and ocean freight exports we plan to expand the frequency of pick-up and delivery and storage where this is needed.” As part of the end-to-end offering, Panalpina’s Kyoto office also covers the Shiga and Fukui prefectures to the northeast of Kyoto, where a lot of technology companies have their production sites.

Panalpina Japan was established in 1969 and today employs close to 200 people. The main offices are located in Tokyo, Osaka, Nagoya, Fukuoka and now Kyoto.

“Being close to our customers is important for us in Japan,” says Simon.

P therefore not only stands for Panalpina’s new office in Kyoto, but also for the company’s proximity to customers.