In a hat trick of sustainability-focused achievements, Panalpina has become globally certified to the highest environmental management standard, reached a gold rating for its Corporate Social Responsibility (CSR) efforts and won an award for business excellence in Europe. 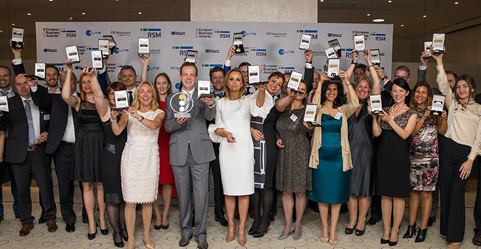 In a hat trick of sustainability-focused achievements, Panalpina has become globally certified to the highest environmental management standard, reached a gold rating for its Corporate Social Responsibility (CSR) efforts and won an award for business excellence in Europe. While each accolade highlights the steps Panalpina is taking to achieve its sustainability goals, they also bring added value for Panalpina’s customers.

Panalpina reached an important milestone this year by becoming the first company in its sector to be globally certified according to the new version of the Environmental Standard ISO14001:2015. ISO 14001 is an internationally accepted standard for implementing an effective Environmental Management System (EMS). It requires organizations to identify and assess environmental facets and reduce environmental impacts. The standard has gained international recognition through its use in organizations as a self-improvement tool, with thousands of companies participating across the globe.

The new version of the standard evaluated Panalpina’s leadership involvement, employee engagement and the initiatives the company implemented that contributed to a 16% reduction in CO2 emissions since 2013. Panalpina was also the first company in its sector to be certified to the original version of the Environmental Management Standard, ISO14001:2004, back in 2010. Having been through the process to become globally certified twice, Panalpina has a clear understanding of what is needed and can inform its customers on how they too can become globally certified.

Another way Panalpina is adding value to its customers’ supply chains is through its involvement with sustainability rating platform EcoVadis. EcoVadis is an independent and impartial collaborative platform that invites companies to assess the environmental and social performance of their business partners. Panalpina’s customers can score the company’s CSR initiatives and how it manages its economic, social, and environmental impacts, and relationships with stakeholders, including employees, customers, suppliers and industry bodies. These results can be benchmarked against other companies and used to continuously improve the CSR program. Not only did Panalpina achieve a gold rating for CSR, it was also recognized as being in the top 1% of those in the industry, and the top 2% of all 30,000 companies being assessed by EcoVadis on CSR requirements.

To top off its recent sustainability achievements, Panalpina has also been named a National Champion for Switzerland at the recent 2016/17 European Business Awards. The European Business Awards recognize business excellence from all industry sectors, embracing businesses of all sizes and from all European countries. Over 33,000 businesses in 34 countries across Europe submitted entries for the awards. Panalpina’s entry for its achievements in environmental and corporate sustainability was judged by an independent panel and evaluated on the core EBA values of innovation, ethics and success and selected to represent Switzerland as a National Champion.

“Becoming certified to ISO14001:2015, achieving a gold rating from EcoVadis and winning the European Business Award are great accomplishments that highlight Panalpina’s ongoing efforts to achieve its sustainability objectives,” explains Lindsay Zingg, global head of quality, health, safety and environment at Panalpina. “But managing our impact on the environment and society is a constantly evolving subject, one that we are committed to regularly reviewing, updating and improving.”