24 hours – a matter of perspective

24 hours can seem endless when a hurricane passes over you. The people of Saint Martin had to live through this experience on Wednesday, September 6, as Hurricane Irma battered the Caribbean island causing widespread devastation. The category 5 storm left the island’s residents isolated and in desperate need for aid, and Panalpina was called to help. 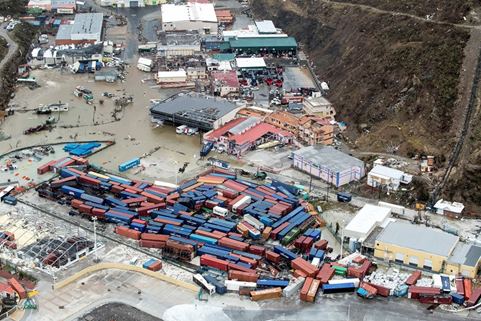 24 hours can seem endless when a hurricane passes over you. The people of Saint Martin had to live through this experience on Wednesday, September 6, as Hurricane Irma battered the Caribbean island causing widespread devastation and severely damaging Princess Juliana International Airport (SXM). The category 5 storm left the island’s residents isolated and in desperate need for aid, and Panalpina was called to help.

At 10:42 am on Friday, September 8, Panalpina received an urgent call from the Netherlands Red Cross asking for assistance to get 65 tons of relief cargo for Saint Martin on board a KLM flight due to depart to Curaçao in less than 24 hours. KLM had offered the capacity free of charge on their next day’s flight from Amsterdam to Curaçao International Airport (CUR), located about 900 km away from Saint Martin.

“When we received the call, a time frame of 24 hours seemed like a very short period, but Panalpina Netherlands took the lead in this challenging task and put an operational team together in order to get the job done, acting as the central coordinator between the goods’ supplier, the overland carrier, the Netherlands Red Cross, KLM Operations, and handling agent Menzies,” says Gerard Braams, Panalpina’s Air Freight procurement specialist in the Netherlands.

Panalpina set up direct links between the different contacts to ensure a timely process. Three trucks with plastic sheeting and jerry cans departed from Ronse, Belgium at 3.00 pm for delivery to Menzies in Amsterdam. Other goods such as solar equipment and generators were supplied by third parties directly to the Panalpina Amsterdam warehouse, where the required documentation was prepared.

Delivery took place at 9 pm, the cargo was labeled and screened, and all goods were ready to fly by 1 am on Saturday. The flight took off at 8.15 am. Upon arrival in Curaçao, Panalpina’s agent CACC, who lead the operation and communication in Curaçao, took over the goods and set up an air-bridge with Saint Martin, whose airport was by then partially habilitated to receive smaller aircraft.

The Panalpina Charter Network booked and transferred a commercial Hercules C-130 from the US to Curaçao. Due to its maximum payload of 18 tons, it took 4 rotations to deliver all cargo to Saint Martin. As the landing strip was damaged and the military had taken control of both facilities and airspace, close contact and communication were necessary to coordinate the delivery.

Between the third and fourth rotation, Panalpina sent the Hercules to Queen Beatrix International Airport (AUA) in Oranjestad, Aruba to collect an additional load of three Red Cross pickup trucks, which were delivered in Saint Martin successfully.

Unfortunately, after having loaded the last 18 tons of cargo in Curaçao, the Hercules had to wait until the potentially catastrophic Hurricane Maria passed. The fifth and last flight of the operation took place as soon as the airport reopened, completing a successful mission.

“Depending on the circumstances, time can seem relative, but help should be universal and Panalpina would like to thank the Netherlands Red Cross for counting on us for this important relief effort. We wish the people of Saint Martin a quick and complete recovery,” comments Gijs Peeters, Panalpina’s country head of air freight for the Netherlands