​For the first time in its history, LATAM Cargo flew a direct route between the cities of Bogotá, Colombia, and Huntsville, Alabama, United States. The new cargo-only route was opened on December 2, 2018, and will be operated once weekly. The new service marks an important milestone for Panalpina as the company continuously expands its Charter Network and the Perishables Network. 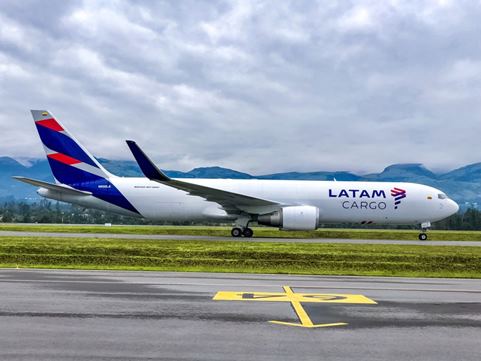 For the first time in its history, LATAM Cargo flew a direct route between the cities of Bogotá (BOG), Colombia, and Huntsville (HSV), Alabama, United States. The new cargo-only route was opened last Sunday, December 2 and will be operated once weekly.

The new BOG-HSV route comes in response to Panalpina’s interest to cut down the travel time for perishables shipped from South America to North America and LATAM Cargo’s commitment to meet the needs of its customers. Accordingly, the LATAM Group’s team assessed the feasibility of implementing this new destination to bypass transit through Miami.

“The sustainability of LATAM Cargo’s relationship with its customers is founded on trust and collaborative work. We are continuously supporting them with their projects by offering the best alternatives possible. This allows us to fulfill our desire to be perceived as strategic partners and to expand their business together,” said Andrés Bianchi, CEO of LATAM Cargo Group.

Panalpina’s gateway in Huntsville, part of the Charter Network, was recently expanded to accommodate perishables. Of the new 1,626 m2 (17,500 sq ft), 1,022 m2 (11,000 sq ft) is cold storage dedicated to perishables with variable temperature ranges. The coolers are located directly adjacent to Panalpina’s main building, less than 100 meters from the apron where aircraft park.

With the new service, Panalpina will reach Huntsville in approximately four and a half hours, cutting down distribution time and simplifying the logistics process. The freighter aircraft will have the capacity to transport some 50 tons of cargo per flight.