Same as last year, Panalpina assisted UNICEF by flying relief aid to Africa to help children in South Sudan, where the humanitarian needs after years of conflict remain massive. A Panalpina chartered cargo aircraft landed last night in neighboring Uganda, carrying nearly 70 tons of supplies. The supplies will be trucked to South Sudan and distributed across the country as the dry season begins. 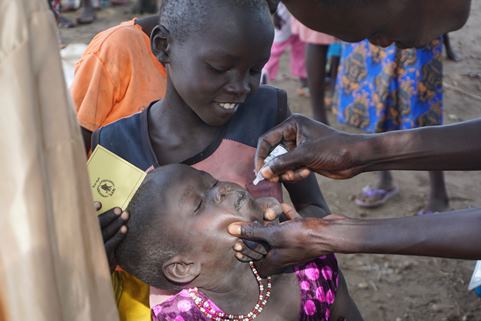 Panalpina’s relief flights at the end of the year have become a tradition whereby the company offers its air charter expertise to UNICEF. Same as last year, Panalpina assisted UNICEF by flying relief aid to Africa to help children in South Sudan, where the humanitarian needs after years of conflict remain massive. A Panalpina chartered cargo aircraft landed last night in neighboring Uganda, carrying nearly 70 tons of supplies including emergency health kits. The supplies will be trucked to South Sudan and distributed across the country as the dry season begins.

Panalpina’s Charter Network arranged the flight in support of the respected UN organization. The consignment of relief aid left Belgium on Wednesday afternoon and items such as health and education kits as well as therapeutic milk to fight malnutrition,supplied by UNICEF (the United Nations International Children’s Fund), are now headed for children, women and families in South Sudan.

“The peace agreement signed in August 2018 gives us hope that children in South Sudan can be children once again and look forward to a better future. But the years of conflict have come at an enormous cost and the humanitarian needs remain massive,” says Tim Irwin, chief of communications at UNICEF South Sudan.

The staggering scale of destruction and suffering determine people's everyday lives in South Sudan. 2.6 million children have been born into war. Around 4.4 million people, or 40 percent of the entire population, suffer from food insecurity. South Sudan now also has the world's highest proportion of children who do not attend school. 2.2 million children receive no education.

For the flight chartered and donated by Panalpina, UNICEF gathered nearly 70 tons of relief aid, which not only includes teaching material for schools, but also equipment for midwives, reanimation equipment and “Interagency Emergency Health Kits”. The standardized health packs containing medicines and medical supplies cover the diverse health needs in humanitarian emergencies and disasters. The kits ensure a fast, reliable and affordable supply of essential medicines for 50,000 people for three months and also address the need of children for psychosocial treatment in emergency situations.

The Panalpina chartered MD-11 freighter took off from Liège (Belgium) in the afternoon of December 5, and arrived in Entebbe (Uganda) in the middle of the night on December 6. For logistical reasons, and same as last year, it was decided to fly into Uganda from where the cargo is now being transported by trucks to South Sudan. The supplies will then be distributed across the country taking advantage of the upcoming dry season when dirt roads are passable.

“I am very pleased that we have again partnered with UNICEF and donated a relief flight to Africa. We have done this for the sixth time now, instead of making gifts to customers and employees before Christmas. The relief flights have become a tradition whereby we offer our air charter expertise and bring some respite to those who are less fortunate than us, especially children,” says Panalpina’s CEO, Stefan Karlen.

“Panalpina's commitment is unparalleled,” explains Hans Kuenzle, president of UNICEF Switzerland and Liechtenstein. “To even come close to covering the enormous demand for life-saving aid in the world’s crisis regions, we rely on the generous support from companies such as Panalpina that transport these goods free of charge.”

Panalpina already supported UNICEF South Sudan last year. In 2016, Panalpina flew much-needed relief goods to Chad, where malnutrition and natural disasters had led to a health emergency. In 2015, Panalpina supplied a charter flight to Burundi, where a recurring crisis and violence took a heavy toll on society. In 2014, Panalpina supported the fight against Ebola by flying life-saving humanitarian aid to Sierra Leone. In 2013, Panalpina’s first relief flight for UNICEF took goods to the Central African Republic.

If you would like to donate to UNICEF's efforts in South Sudan, please visit the UNICEF South Sudan site.