An algorithm for potential lost customer control in logistics was the winner in the first Kickbox organized by the Panalpina Digital Hub, Panalpina HR and Zurich-based incubator BlueLion. The winning entry came from the team Capture+ from Panalpina Switzerland, which was among three finalists that pitched their Kickbox ideas to a jury in Basel on February 26. 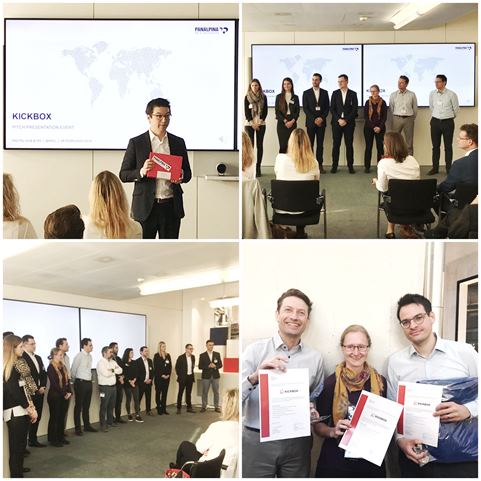 An algorithm for potential lost customer control in logistics was the winner in the first Kickbox organized by the Panalpina Digital Hub, Panalpina HR and Zurich-based incubator BlueLion. The winning entry came from the team Capture+ from Panalpina Switzerland, which was among three finalists that pitched their Kickbox ideas to a jury in Basel on February 26.

What’s a Kickbox? It’s an innovation process that Adobe developed for its own use and then open-sourced to share with everyone. It is both a process for individuals and a system for deploying that process across an organization at scale. Watch this video by Adobe to see what a Kickbox is about.

A total of 30 business ideas for large-scale process optimization were submitted. Seven were chosen to participate, and the kickoff took place at the BlueLion offices in Zurich back in October 2018.

The teams then worked on their ideas back in their countries, with continuous coaching from BlueLion on corporate design thinking, and met for their final presentations at the Panalpina headquarters in Basel on February 26.

Participant teams had three minutes to pitch their ideas and five minutes for a Q&A session with a jury including Kaija-Leena Korolainen, regional head of Human Resources Europe; Lucas Kuehner, global head of Air Freight and member of the Executive Board; Markus Sandbrink, regional head of IT Europe; and Luca Graf, corporate head of digital innovation.

Capture+ for the win!

Second place went to Wojciech Gulaj, Pawel Gryszkiewicz and Katarzyna Listkiewicz from the team QR code from Panalpina Poland for their idea on integrating subcontractors with Pantrace, Panalpina’s global track and trace tool, for quick and accurate updates.

Mario Pallisch and Sophie Puschacher from the BidBuddy team from Panalpina Austria finished third with their robotic buddy to simplify Total Landed Cost (TLC) calculation as well as the quotations for spot- and tender-inquiries.

The three teams will now work with Panalpina experts in these areas to ensure that their ideas are steered through completion.

Other ideas that didn’t make it to this Kickbox will also be taken up by the Panalpina Digital Hub for further development, as the results of these pilots are key. More importantly, the innovation process behind the Kickbox, while working directly with customers, will allow Panalpina to develop new potential while remaining flexible.

In short, the teams will "get closer to the customer, solve a real problem, and verify with real users," says Cedric Rutishauser, senior venture development manager at the Panalpina Digital Hub.

“Predictive analytics and artificial intelligence will optimize products and services, and create new ones, as can currently be seen in Amazon’s recommendation engine. The Capture+ algorithm shows great potential in this area,” adds Luca Graf, Panalpina’s head of digital innovation.

The Panalpina Digital Hub focuses on innovative technologies with a potentially high impact on the freight forwarding and logistics industry, such as the Internet of Things (IoT), cloud computing, predictive analytics, artificial intelligence (AI) and blockchain.