Our customer, Siemens, needed us to move a huge generator component: it weighed nearly 40 tonnes and was six metres long with a diameter of three metres. 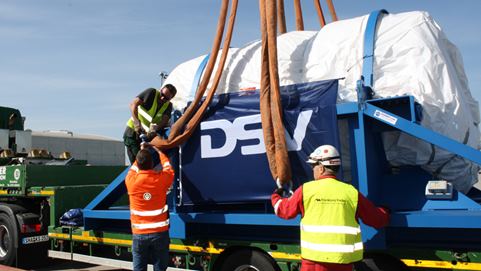 If the transport is also required to happen within a very narrow time frame, air charter is likely to be the only viable solution.

Our customer, Siemens, needed us to move a huge component for a generator: it weighed nearly 40 tonnes and was six metres long with a diameter of three metres.

The component had to be moved halfway around the globe from Germany to Australia, and the transport had to take place within a narrow time frame, which realistically left only one transport option: Air charter.

DSV received the first inquiry concerning this project in the middle of 2018, received the order in the first quarter of 2019 and completed the transport in April.

“The entire process lasted nine months” says Project Manager Marco Salvatore, DSV Australia and continues: “Following negotiations of the contract, we had to deal with the many operational queries and finally, we were ready for the actual transport”.

A complex operation successfully completed
For this specific job, DSV chose to charter an Ilyushin IL-76 aircraft from Volga Dnepr Airlines, which can load up to 50 tonnes.

The cargo was loaded on-board the chartered aircraft at Leipzig Airport (Germany) and arrived safely in Townsville (Australia), where it was unloaded from the aircraft and delivered to its final destination on the same day with no issues or delays.

“A complex operation successfully completed thanks to careful planning and excellent co-operation with Siemens, the recipient (Siemens’ customer) and between our own project transport teams in Germany, Australia and Denmark,” Senior Broker Per List, DSV Project Denmark concludes.