All points on the agenda of the extraordinary general meeting were approved. The company now has a new Group name, a new member of the board, and a new and a new Chairman, as now former Chairman Kurt Larsen stepped down. 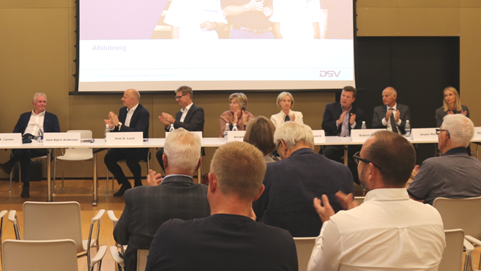 All points on the agenda were approved, resulting in the following changes:

Our Group name was changed from “DSV A/S” to “DSV Panalpina A/S”, with “DSV A/S” as new secondary Group name.

English is now also officially the company’s corporate language for financial reporting, company announcements and the like.

New member of the board

During the meeting, Beat Walti, proposed by the Ernst Göhner Foundation, was elected new member of the board.

Mr. Walti is Dr.jur. and attorney and partner in Wenger & Vieli Ltd. Besides his post on the Board of Directors for DSV Panalpina A/S, he is Chairman of the Ernst Göhner Foundation and RehaClinic AG. His special competencies lie within:

Following the closing of the EGM, Kurt Larsen announced that he wishes to resign as Chairman and Member of the Board of Directors, effective as of 24 September.

Kurt Larsen has been a part of DSV since 1989, and a pivotal figure in the development of the history of DSV. Read his story here.

“I just turned 74, and I feel it is time for new and younger powers to take my place. It has been incredible to be part of DSV... I have lived my life in this company, and I am proud to have contributed to making this a prosperous company. DSV has gone from being a very small company, where times could be tough, to becoming one of the world’s largest within our industry, and it has been a pleasure to be part of every step. Thank you to all the employees for your hard work throughout my journey in DSV!”

Thomas Plenborg, [now Chairman of the Board] commented:

"On behalf of the Board and the company, I wish to thank Kurt K. Larsen for his exceptional contribution to DSV. Throughout 30 years, Kurt K. Larsen has faithfully worked to deliver outstanding results, and he has played a major part in the company’s continued success. We wish Kurt an enjoyable and well-deserved retirement with his family.”